I’ve been thinking about the relationship between different meanings of the word  ‘habit’. Dictionary.com offers 11 (slightly Americanised) different takes :

It is meaning numbers 1-8 that most concern me, though when I looked up the history of the word, (Online Etymology Dictionary) I was interested to see that it was early connected to the Monk’s habit from the Latin, habitus “condition, demeanour, appearance, dress,” and that made me think that, of course, the special habit worn by Christian monks in the 13 century was not just a form of dress but an outside marker to the habits of the wearer  – appearance as a form of being.

Thinking about this sent me looking for poems about habits ( got some? let me know please via comments) and I found this, from Gerard Manley Hopkins, which touches on the habitual daily practice, the habit of one’s body and the connection of this, for GMH  to the habit of a priest:

The Habit of Perfection

Elected Silence, sing to me
And beat upon my whorlèd ear,
Pipe me to pastures still and be
The music that I care to hear.

Shape nothing, lips; be lovely-dumb:
It is the shut, the curfew sent
From there where all surrenders come
Which only makes you eloquent.

Be shellèd, eyes, with double dark
And find the uncreated light:
This ruck and reel which you remark
Coils, keeps, and teases simple sight.

Palate, the hutch of tasty lust,
Desire not to be rinsed with wine:
The can must be so sweet, the crust
So fresh that come in fasts divine!

Nostrils, your careless breath that spend
Upon the stir and keep of pride,
What relish shall the censers send
Along the sanctuary side!

O feel-of-primrose hands, O feet
That want the yield of plushy sward,
But you shall walk the golden street
And you unhouse and house the Lord.

And, Poverty, be thou the bride
And now the marriage feast begun,
And lily-coloured clothes provide
Your spouse not laboured-at nor spun.

I’m interested in the way habits of the body (silence, for example) begin as sensory practice, but build to inner reality in this poem. Hard for Hopkins, who loved the beauty of the world so much, to force himself into this  retreated blank of sense! Yet through  not hearing, not speaking, not seeing, he finds  music, eloquence and sight… Something in me (as no doubt something in Hopkins) shies away from this rejection of sensory. Balance up your sense of him by reading this poem alongside one of his madly-loving-the-world poems, such as Pied Beauty.

I’m taking delight in gardening at the moment ( yes, despite the weather) mainly thanks to Emma, who has been clearing back the overgrown stuff for me, and it’s the plant-related meaning that has been pulling me toward these thoughts. In plants ‘habit’ is still deeply connected to that very early meaning  – that how a thing looks/lives is what it is  – for example, a plantswoman might tell you that the Hardy Geranium, ‘Anne Folkard’ has ‘a lovely trailing habit’. 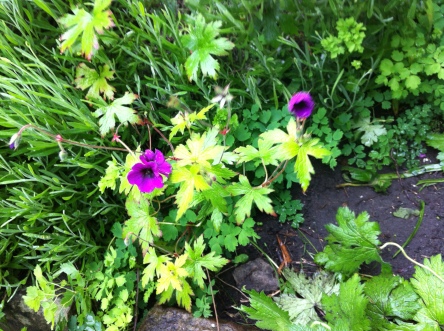 But what your plantswoman would also mean is that ‘Anne Folkard’ is lovely and trailing. She grows in her characteristic, habitual way.

While I’ve been thinking about the habits of certain plants, I’ve started wondering how the word connects to our more common usage of the word, as in good or bad habits, or, leaving moral judgements aside, just plain things you do, characteristic behaviours. (And as my own habits, good and bad are of enormous and frustrating interest to me, I’m signing up for wayoflifeapp and will report back on how I get on with it).

The habit of a plant  – its general form or mode of growth – is both how it grows and essentially, from one point of view, what it is. The word ‘habit’ seems to exist at that point where something that is not fixed – but rather, growing – becomes fixed.  That’s an interesting place.  Does Jane Davis have a habit in the same way Geranium ‘Ann Folkard’ does?

This usage of the word points to Nietzsche’s thought that ‘we become what we are’. I’ve always liked the two sides of that aphorism, which seems to determine us even as it denies determinism. As a human individual in process of growing, or as a member of a family, that is surely often how it feels.  People grow into themselves.

It’s been surprising to me to realise that some of  the habits and practices I unconsciously built into the Get Into Reading model come from things I learned as a child. My mother, divorcing in the mid-1960s, aged about thirty and with four children  – the oldest, me, not yet 10, the youngest a babe in arms – took a pub, because it seemed a good way of earning a living with the kids on the premises. Childcare, work and social life all wrapped up! Our pub was Parliament Place, just off Liverpool’s Upper Parliament Street, in Liverpool 8.

That’s my little sister in the centre of the group of girls on the far pavement, and that’s our pub on the corner, the pub with no name, affectionately know to its friends as The Little House. My sister says the two tiny tots in the back of the mini pick-up are our brothers. Where was I?  In the long hot summer of 1968…I’d be 12. I had a job in the Arab grocery shop round the corner in Stanhope Street. That shop man, name forgotten, let’s call him Ali, cooked a fine mutton and potato stew which he used to share with me. It tasted unlike anything I’d ever eaten. I’m thinking as I write, cumin? Coriander? I worked there and on a cooked meat stall in St John’s market. Later, but not much later, it might even have been later that year, Saturdays consisted of walking down into town and hanging out in the International Section of Central Library or the Walker Art Gallery.

There were kids behind the doors in our street who didn’t go out until they were five and had to be sent to school. Florrie Bird, aged nine and going on forty, would sell you her granny, they said, for sixpence. Patsy Flanagan was one day a teenage girl in our street and then the next a bruised prostitute on the corner of Hope Street, with dead, drunk or narcotised, eyes. We lived, in that two bedroom flat above the pub, with mice, scabies, lice, fleas. Our Mum drank heavily into the night – what times! what lock-ins! what parties !  -and fought with Tony, and became, in a couple of years, addicted to alcohol. They were the worst of times, and yet while we lived them, they seemed the best of times.

I think she felt free, after her divorce, and enjoyed the sense that she was good at something. And she was: in the pub, there were huge social differences and yet a rough equality before the law and, usually, a social tact which meant that people’s deficiencies were overlooked or turned into bearable jokes. Wit in conversation was prized above all, along with any kind of storytelling, good singing or comedy, and, though we laughed at it, snappy dressing was also a talent. But everyone, even those with no social offerings, had a place here. Barry, in his filthy coat, always had that corner by the door of the bar. Margaret and June drank port and lemon disapprovingly in the parlour. Chinese Jim, Paddy and Molly, the Lucas boys with their acne and greasy hair, handsome Bo, Ace and Jimmy in sharkskin suits. It’s a small pub on a corner in a very small street and was a local for I guess about sixty households, many of whom even then were still connected to the  sea, the Port of Liverpool, the docks, and lived within a couple of hundred metres walk. And we had the itinerant drinking wanderers and occasional repertory actors from the old Everyman. People knew each other’s habits.

Occasionally the social order broke down and a fight would erupt and I’d wake up to that excitement, scuffling and shouting, tables and chairs scraping the floor, banging over, then the pub door slamming. One night I looked out of my top floor garret window to see two men squaring up to each other, circled by everyone else. One of these guys took off his jacket and handed it back, then put a hand to his head and removed a toupee and handed that back, before dancing forwards, stepping sideways, fists up. Everyone laughed at the toupee-lift but Gerry was too angry to hear them.

If someone had a talent, whatever it was, it was appreciated; poker, stolen goods, even lying. Sailor John might recite John Donne or a Shakespeare sonnet. A drunken old actor would do us a great Shakespeare soliloquy, or Marv could do a Johnny Cash. All offerings received with gracious pleasure by your host, my mother, Betty, a lovely barmaid landlady, welcoming and witty.  There were boundaries about nastiness and violence: Prue and Margaret, posh old birds both of them, who had fallen or drunk themselves down into very hard times, were welcome when relatively sober and restrained, but when they got pissed and snooty, lording it over everyone and shouting  ‘Ignorant uneducated people!’  or yelling at Mum’s boyfriend Tony, ‘You’re nothing but a kept man!’  they were barred out. Violent men were tolerated to a point, in that we might  all be scared of Ronnie, but  people would eventually team up to eject him. Most of the time my mother created an atmosphere in which these disparate people would accept and enjoy themselves and each other. Her recipe for life was written into me as habit: ‘enjoy it’.

The single-minded pursuit of pleasure is often the sign that someone is on the run from pain. My mother’s determination to be happy soon tipped over into not taking on the challenges of real life, which, after all, is a very tough one and needs solutions more creative and complex than whisky.   I spent a large part of my early adult life unlearning a lot of blot-it-out stuff I learned at my mother’s side in the pub. But when what was left of Betty was cross-fertilised with my experiences in the literature tutorials of Mr Brian Nellist (learn by loving things, learn by appreciating), and the mind-set of my husband Phil, with his insistent demand that reading should be about finding what moves you, then – wonderfully – the new created thing, this gracious species that is the Get into Reading model, was generated. Pub, and pulpit, and personal. I’ll talk about pulpit  bit another time.

Meanwhile, for this habit of pleasure in the shared human, I thank you, Mum.

9 thoughts on “On Habit”