Been waiting for a novel from George Saunders for a long time. For years short stories and careful thinking have been his thing. Much of that is online – look him up. Then some time ago I read somewhere that GS is writing a novel. I pre-order. The other day it arrives. Yesterday morning I started reading. Read about a third. Last night read another chunk and woke this morning at 5.00am wanting to get reading on the rest of it. Last book that happened to me with was The Unnamed (Joshua Ferris) , before that Home (Marilynne Robinson), before that Gilead (Marilynne Robinson). Before that almost everything by Russell Hoban.

Lincoln in the Bardo is hard to read. At first I was disorientated, as if I had landed up in a foreign country where I didn’t understand the language or the clothes or the food or how to cross the road. Yes, that’s what it’s like in the Bardo, the in-between place between this life and next. There are only voices here. The novel is related to Mrs Oliphant’s weird ghost-novella A Beleaguered City,  but even more so to Dante’s Divine Comedy and has the feel of a play by Samuel Becket. But it is not like anything. It is its own thing, has its own voice, very much the voice of George Saunders. If you’ve read his short stories ‘Sea Oak’ or ‘The Tenth of December’, you’ll recognise the mind, the consciousness, the heart of the man.

I read it ridiculously fast, with no pencil, so I can hardly remember any detail. Only the voices – seemingly hundreds of them, wailing, complaining and gnashing their decayed teeth.

Later I will reread it to try to take some of it in.

Why does  it matter to me? Thirty years ago, I wrote my ph.d thesis on ‘Visionary Realism’, a term  I think I coined, or maybe borrowed, to describe writing that tries to locate something beyond the everyday of  kitchen sink realism, yet is not fantasy, is real . This was not an academic exercise for me but rather a three-year attempt to put into words my life’s  subject matter. This is what I am about. The book that pushed me towards that vocation was Doris Lessing’s Shikasta. I do not have a religion, and yet I believe there are things (thoughts, beliefs, patterns, feelings)  that only religions hold. Or have held; maybe it is going to be different in the future.  This stuff is vital to humanity; it helps us think differently, out of our tightly material selves. We are not only material beings. I need a language for whatever the rest of me is…

Mostly I get at this stuff through poetry, a lot of it religious (Dante, George Herbert, Milton).  As readers of this blog will see, I translate this explicitly religious stuff into my own language so as to make it meaningful to self. I take Christianity as (sorry) a huge explaining story, a metaphor. There are other writers, more borderline in relgious terms (Wordsworth, George Eliot) who are easier  for me to translate, and  since, Shikasta, I’ve been single-mindedly seeking other contemporary writers who work in this  area. I don’t want to be stuck in the past! But I do want to be in the place I where I can do my human-thinking work. There are not many of them. Hence my obsessions with Marilynne Robinson, Russell Hoban, The Unnamed.

Hence Lincoln in The Bardo gets second reading  later today. It is a novel but it is also poetry, so let it be poem of the day today.

Here’s Lincoln, suffering at the tomb of little son, handling his son’s actually dead body, accepting death and returning to the civil war that is his life… 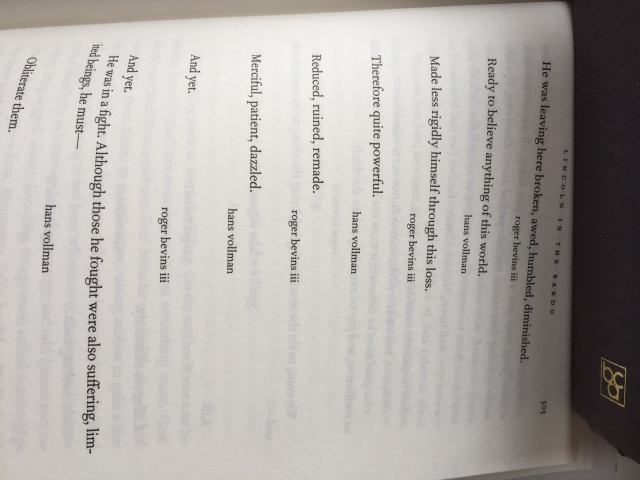 4 thoughts on “Reading Lincoln in The Bardo by George Saunders”