Yesterday I went to Kew Gardens to attend the People’s Postcode Lottery Gathering 2017 – imagine a family and friends  party on a large-scale, with third cousins from every part of the  country and others flying in from much farther flung places, catch-up chats, meeting new people, delightful sausage rolls, very hot in the conservatory – phew –  and instead of the bouncy castle,  an inspirational speaker in the form of  Jonathan Peach to remind everyone to be the best version of themselves they could be, ‘every day is a best pants  day’.  That certainly gave me something to think about, and  this morning I surveyed my underwear drawer with new eyes.

I had set out early from my friends’ place in Highbury by overground train, intending to arrive early – the gathering was to start  about 11.00, and Kew Gardens  opens at 10.00. I’ve never been there before so was hoping I’d get an hours walk in before the day started to enjoy the Great Broad Walk Border. And so I did! Imagine you are an LFC supporter visiting Anfield for the first time, or a clothes maniac at British Fashion Week. That’s how this gardener felt at Kew,  drunk on it,  physically light-headed, overwhelmed with  delight.

Talk about inspiration. The word must be about fresh spirit –  I look it up in the Etymological Dictionary. Yes – inhaling, breathing in, being breathed into…I felt the great work of Kew inspiring me like lovely  great heady lungfuls of air.

I haven’t managed to do for my garden what this blog has helped me do for reading and writing –  developing (an almost) daily practice. My poor garden, love it as I do, suffers from lack of my loving time and attention – I’m so intermittent! But  seeing those borders –  the art of horticulture at the height of  energetic excellence – hugely encouraged me.

I don’t expect Jonathan Peach got out for a walk during the day,  but if he had, he’d have seen something being brilliant, made by the brilliance of a very dedicated team: I saw  lots of staff and volunteers working. But I also thought about the people I couldn’t see right now – the planners and plantsmen and women, the marketeers and accountants, the cleaners,  who had made ‘Kew’ happen. The Walk was big enough not to seem busy, but there were plenty of visitors at 10.10am. Gorgeous to see how many small children were enjoying the flowers.

I loved the plans/180 drawings that allowed me to  read the names of everything in each section of the border. I imagined someone working on the plans and later when Jonathan spoke about ‘right to left’ thinking, I remembered those plans.

I remembered in my early twenties reading a short story by Virginia Woolf, ‘Kew Gardens’.  You’ll find it here. I remembered the blank puzzlement the story provoked, and when I reread it  this morning,  I felt some of that again. I read  everything Virginia Woolf ever wrote in my early twenties – she was a woman writer! I wanted a role model! But she was so posh! I don’t know if I realised that at the time, how class-bound she was… how far-off and other-world. She was writing about worlds I had  never imagined, never seen. Kew Gardens! And those people strolling. Somehow this connects to the odd sense of relief I had when I visited D.H. Lawrence’s childhood home in Bestwood – the two up two down terrace was just like the house my grandparents  had lived in, at  Eldon Terrace, Neston.  I can remember  a strong feeling of  connection –  he knows about my life. Not a feeling I usually seek in literature – at least not in that top level  way, we worethe same boots  kind of way.  This is something to think about another day.

When I reread the story this morning I  thought, she has caught some of that sense of life-connection between the flowers, the snail, the people, as if the people are part of the life of the gardens, moving in and  through them:

The figures of these men and women straggled past the flower-bed with a curiously irregular movement not unlike that of the white and blue butterflies who crossed the turf in zig-zag flights from bed to bed. The man was about six inches in front of the woman, strolling carelessly, while she bore on with greater purpose, only turning her head now and then to see that the children were not too far behind. The man kept this distance in front of the woman purposely, though perhaps unconsciously, for he wished to go on with his thoughts.

I liked very much the lens moving from close up minutiae to expanded horizon, like the almost scientific observation of the snail:

In the oval flower bed the snail, whose shell had been stained red, blue, and yellow for the space of two minutes or so, now appeared to be moving very slightly in its shell, and next began to labour over the crumbs of loose earth which broke away and rolled down as it passed over them. It appeared to have a definite goal in front of it, differing in this respect from the singular high stepping angular green insect who attempted to cross in front of it, and waited for a second with its antennæ trembling as if in deliberation, and then stepped off as rapidly and strangely in the opposite direction. Brown cliffs with deep green lakes in the hollows, flat, blade-like trees that waved from root to tip, round boulders of grey stone, vast crumpled surfaces of a thin crackling texture–all these objects lay across the snail’s progress between one stalk and another to his goal. Before he had decided whether to circumvent the arched tent of a dead leaf or to breast it there came past the bed the feet of other human beings.

And the procession of passers-by is still there –  first these Americans, then this grandfather and the three little girls, now two  nannies with  blond  babies in buggies, now an Indian family taking many pictures, here a serious photographer very close to the Coneflowers,  there an old lady reading on a  recessed bench, and now me, on my way to the Gathering…

I’d mentioned Pope yesterday and Clare  responded to remind me both of  Virginia Woolf and  the wonderful dog Diogenes in Dickens’ Dombey and Son. That  made me think I might sometime read  things about dogs here…meanwhile  I enjoyed the statue of the White Greyhound of Richmond, and here he is, outside the Palm House: 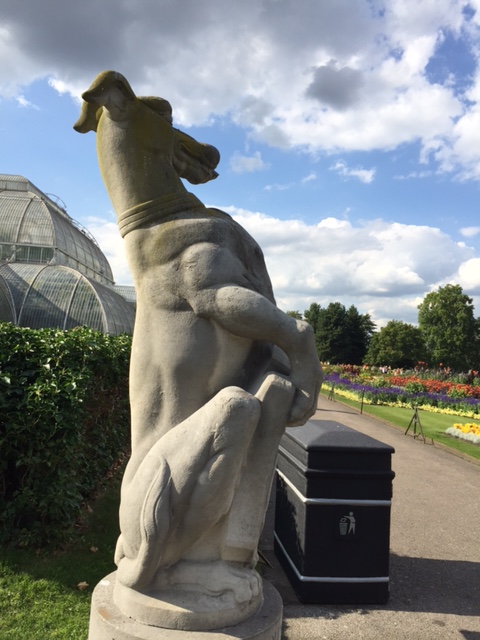 2 thoughts on “Things being Brilliant at Kew”