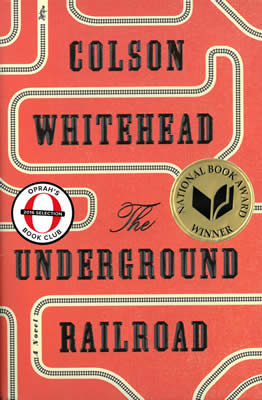 I’d heard  good things about this novel from various sources but it was  seeing Barack Obama’s recommendation that tipped me into buying it – on  my  Kindle on the way to the  airport. But I wished I had a paper book version, as I wanted to move back and forth in the novel, reread, go back over sections… that’s not so easy  in a kindle reading.

All the same, a  terrific read,  full of anguish, horror – how could it not be, most of the story  coming from the southern slave states…but also great humanity, bravery: Cora, the  slave who escapes and runs and runs, epitomises the powerful  will to survive and find freedom. The book takes the metaphor of the underground railroad – a network of people  willing to help escaping slaves make their way to the north –  and turns it into a reality, a real railroad, really underground, by which Cora is able to cross what I think was both time and space – and take the reader  through many experiences of  many black people. So you read many horrors and much inhumanity and sheer lazy stupidity  but also moments of great strength, love and beauty. I was particularly moved by the account of communal life on the Valentine farm:

Work needn’t be suffering, it could unite folks. A bright child like Chester might thrive and prosper, as Molly and her friends did. A mother raise her daughter with love and kindness. A beautiful soul like Caesar could be anything he wanted here, all of them could be: own a spread, be a schoolteacher, fight for coloured rights. In her Georgia misery, she had pictured freedom and it had not looked like this. Freedom was a community labouring for something lovely and rare.

Here Cora finds a library  and  reads the lives of all black people:

Cora read the accounts of slaves who had been born in chains and learned their letters. Of Africans who had been stolen, torn from their homes and families, and described the miseries of their bondage and then their hair-raising escapes. She recognised their stories as her own. They were the stories of all the coloured people she had ever known, the stories of black people yet to be born, the foundations of their triumphs.

People had put all that down on paper in tiny rooms.

I thanked Colson  Whitehead for putting all that down on paper.

I’ll be buying a paper book version as soon as I get home and reading it again.