Last week I spent a rare and lovely couple of hours reading with colleagues who are working on The Reader’s Shared Reading North West team.  This is a huge piece of work, funded in part by NESTA, to test and learn from that test practice, about scaling Shared Reading. The team have tough targets to meet and a lot of responsibility: their work is helping shape the future of The Reader. They  must find volunteers to lead Shared Reading groups,  recruit them, train them, help them set up and then move on to the next batch  of recruits. We don’t have the right tools yet – they are in development, too, so all  in all, it’s  a tough gig. A number of the team have  been with the organisation a good while: they’ve seen plenty of changes.  I’d brought a few things with me that I thought they might enjoy or find  helpful.

First, the  wonderful, scary and uplifting ‘I am Henry Finch’ (by Alexis Deacon, illustrated by Viviane Schwarz), which I’d chosen because I’d just discovered it and was desperate to share, but also because it is a book about the power of thought. 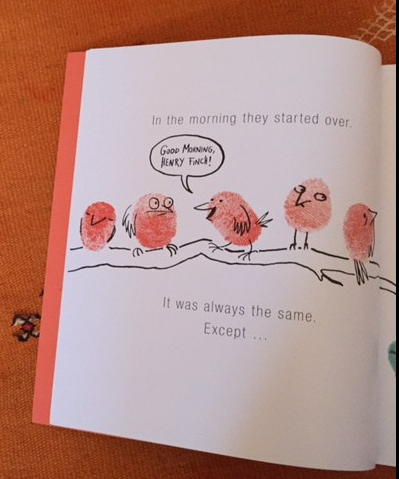 Life was simple with finches – every day the same mind-numbing routine chatter, though with the odd (we try to ignore it and pretend it doesn’t happen) terrible bit: 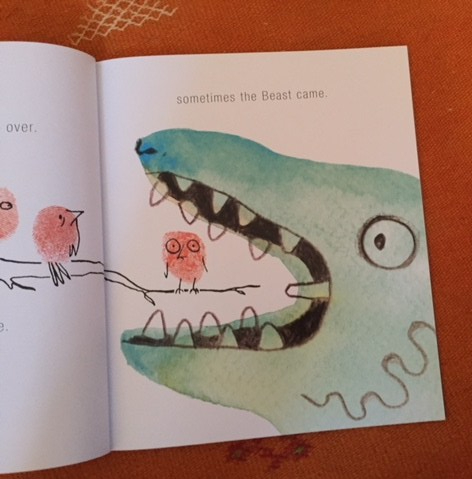 Reading at work is a wonderful thing. Suddenly the book exists in another dimension. In home life you’d almost certainly be reading this with a child, whereas here I was, sitting round a boardroom table with  eight adults in the middle of a serious and difficult work project. 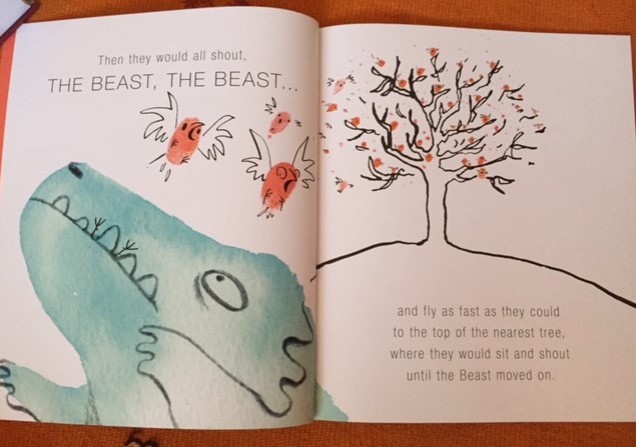 The next part of the programme was chosen for an even closer affinity to working life. This is the chapter in The House at Poo Corner  by A.A. Milne, when  Poo and Piglet go to visit Owl on a blusterous day, Owls tree falls down and they are all trapped, sidewise, inside what was once Owl’s house.

Sounds like one of those working days, doesn’t it? With  everything where it wasn’t, someone must act but before someone can act, someone must think. Thinking takes place. Scary. Poo asks Owl,

“Could you fly up to the letter-box with Piglet on your back?” he asked.

“Because you see, Owl, if we could get Piglet into the letter-box, he might squeeze through the place where the letters come, and climb down the tree and run for help.”

Piglet said hurriedly that he had been getting bigger lately, and couldn’t possibly, much as he wold like to, and Owl said that he had had his letter-box made bigger lately in case  he got bigger letters, so perhaps Piglet might…

Change management! Poor old Piglet’s job description is changing before our eyes. We now need you to be hoisted up  by a bit of string and to…

I’d thought we’d all enjoy a laugh and small-scale recognition of  the way problems  often emerge (unexpectedly! Who knew the house would go sideways!) and how solving them rarely feels great – usually feels more seat-of-the-pants terrifying.  Which we did.  But the thing that was really striking was the distance between the actual experience of the task (escape from Owl’s blown down house) which is  worrying and  tentative and could go badly wrong, to the  account of it given later, by Poo, in a laudatory song, generously ascribing the original idea to Piglet himself:

Then Piglet (PIGLET) thought a thing:
“Courage!” he said. “There’s always hope.
I want a thinnish piece of rope.
Or, if there isn’t any bring
A thickish piece of string.

So to the letter-box he rose,
While Pooh and Owl said “Oh!”
and “Hum!”
And where the letters always come
(Called “LETTERS ONLY”) Piglet sqoze
His head and then his toes.

Great Myths of the workplace! Yet it was Piglet, who, trembling and blinching, did indeed go up on that piece of string.

By the time we’d read  these two works of Great Literature, our brains and hearts were primed for something serious.

I’d brought ‘Once Only’ by Denise Levertov, because I’d just read it, and because I thought we might want something serious as well and because it didn’t connect to work, to our tasks, only to being human. I’d thought, it will be good to have some time being simply human together.  I don’t have time to write about it today, but here it is and I’ll pick up here next time.

All which, because it was
flame and song and granted us
joy, we thought we’d do, be, revisit,
turns out to have been what it was
that once, only; every initiation
did not begin
a series, a build-up: the marvelous
did happen in our lives, our stories
are not drab with its absense: but don’t
expect now to return for more.  Whatever more
there will be will be
unique as those were unique. Try
to acknowledge the next
song in its body-halo of flames as utterly
present, as now or never.