A pleasure this morning to spend my reading hour with the new Read to Lead course handbook, which landed on my desk yesterday. Thanks to the team who have worked so hard to produce such a lovely, useful thing! 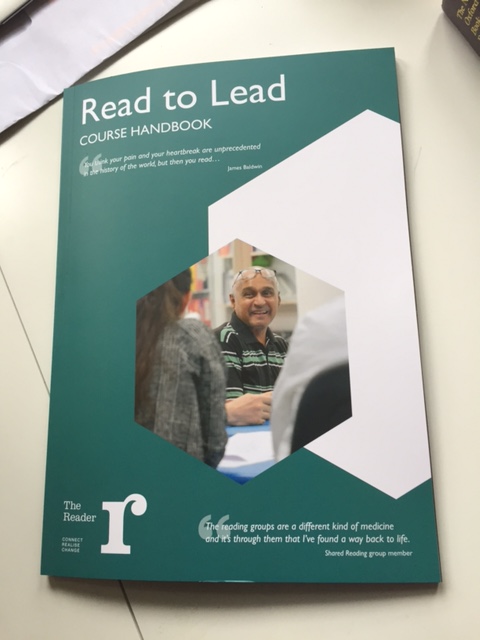 It was a pleasure, too,  to remember this, which is featured on page 31:

I HAVE seen
A curious child, who dwelt upon a tract
Of inland ground, applying to his ear
The convolutions of a smooth-lipped shell;
To which, in silence hushed, his very soul
Listened intensely; and his countenance soon
Brightened with joy; for from within were heard
Murmurings, whereby the monitor expressed
Mysterious union with its native sea.
Even such a shell the universe itself
Is to the ear of Faith; and there are times,
I doubt not, when to you it doth impart
Authentic tidings of invisible things;
Of ebb and flow, and ever-during power;
And central peace, subsisting at the heart
Of endless agitation.

From The Excursion Book IV, by William Wordsworth

This is one of Wordsworth’s enormous metaphors which point us in the direction of the  unseen unknowable but intimated reality he exists as a poet to tell us about. That we might pick ‘the universe itself’ up to our ear and hear reverberations of ‘invisible things’ is a marvellous, to me ,true-feeling idea. And, this being Wordsworth, he goes on to have a go at describing those invisible things, things which struck me, this morning, as I wait for the polling station to open, as relevant to my day:

Authentic tidings of invisible things;
Of ebb and flow, and ever-during power;
And central peace, subsisting at the heart
Of endless agitation.

Good to read how, by picking the universe up and concentrating on it, listening to what comes back, we are to find access to some kind of ‘central peace, subsisting at the heart.’ Like the daily reading practice which I record here, I’m finding the exercise of  choosing something to look at and photograph each day gives me just such a moment of ‘listening’.

Now to enter in the  fray of the  world and – whatever the result of the  General Election –  endure more agitation.

I don’t have time to write much this morning as need to get out and participate in democracy before catching the London train. As I pack my bag I remember it is less than a hundred years since the slogan ‘Votes For Women ‘ was an extreme and unimaginable aspiration.

On my commute I’ve been listening to Cal Newport’s  Deep Work, a book which offers insight into why it’s hard to concentrate in a distracted world, and what you can do about it. There are interesting thoughts here, and I’ve been trying to test some of them out. I’d already decided to  limit my email time – which I’ve done by putting up a weekly out-of-office message explaining I’ll only answer at set times. If people need a quick answer they have to ring me up or text me. That seems to work, and has convinced me that most email messages are not urgent, and I don’t need to check them 10, 15, 20 times a day. The time saved not checking is worth having. But Cal’s book goes further, and suggests we should practice deep concentration, with our network connection off… because we can’t multi-task, and every time we interrupt ourselves we lose energy and interrupt our own mental processes. As I’m reading on an audio book, I can’t flip through to find a good quote for you but I will be buying a paper copy, and I’m recommending it.

A little while ago I wrote about Denise Levertov’s poem ‘O Taste and See’ which begins by quoting this poem by Wordsworth. Deep Work made me think of the Wordsworth poem:

The world is too much with us; late and soon,
Getting and spending, we lay waste our powers;—
Little we see in Nature that is ours;
We have given our hearts away, a sordid boon!
This Sea that bares her bosom to the moon;
The winds that will be howling at all hours,
And are up-gathered now like sleeping flowers;
For this, for everything, we are out of tune;
It moves us not. Great God! I’d rather be
A Pagan suckled in a creed outworn;
So might I, standing on this pleasant lea,
Have glimpses that would make me less forlorn;
Have sight of Proteus rising from the sea;
Or hear old Triton blow his wreathèd horn.

Wordsworth contrasts ‘the world’ – the human world we create, world of time and stuff, with the other world, the planet perhaps, world of Nature, and he finds us (or maybe himself) out of kilter. Haven’t you had that feeling?
When I have it, it is likely that I don’t notice the qualifier, ‘too much’ with its hidden implication of a possible balance. There is a place on a scale where the world might be with us the right amount, then?
‘Late and soon’ he writes, bringing time into it in a peculiarly ‘busy human’ way: as if Time were cut down into the little pieces on wither side of us, just before or just after this moment.
I’ve always read ‘getting and spending’ as about money and material objects but just now as I read I thought of them differently, as being perhaps to do with the deployment of energy,  of the powers we lay waste to in the  other half of the line.

Getting and spending, we lay waste our powers:

I’m thinking of busyness, of rushing about, of using up your power, doing things. What if we just stopped, and conserved some of that energy? Wordsworth seem to achieve a moment’s mastery at this point and looks up, wonderingly:

Little we see in Nature that is ours;
We have given our hearts away, a sordid boon!

It’s like looking out onto a strange landscape, an unfamiliar world – this world of Nature looks unconnected to whatever feels like ‘ours’ – and what would that be? The next line seems to indicate we’ve changed, we are no longer natural. ‘We have given our hearts away, a sordid boon!’
I walk up Caldy Hill and sit on the bench overlooking the lie of the land and sea; I see a kind of timelessness. I work in my garden and feel the inch of the seasons, fleeting beauty, change. These moments I seem to get my heart back. But in the rush of ‘getting and spending’ my power, my energy, even my money and my stuff – where am I? It might feel good, says Wordsworth, but it is not. Its a boon , a good, but a ‘sordid’ one. And we gave them away! We chose to do it! And now it seems, having given our hearts away, we can’t feel things we might have felt :

This Sea that bares her bosom to the moon;
The winds that will be howling at all hours,
And are up-gathered now like sleeping flowers;
For this, for everything, we are out of tune;
It moves us not.

There is storm in Wordsworth’s mind, the sea, the wind, though the weather seems calm now – the sea and wind are upgathered ‘like sleeping flowers’. We don’t hear the music of storm or peace, ‘we are out of tune;/ It moved us not.’
There’s a grim reality to this recognition: I don’t feel anything.  this is a possible turning point.
Wordsworth turns his mind to times when humans might have believed in different gods, when he might have been felt different – ancient Greece, ancient Greek gods – was it different then? But ‘might’ is a key word.
I ask myself  if our world is any different to Wordsworth’s world,  to Homer’s world. In all worlds, humans may need time to let nothing happen, to hear the sea, to watch the wind.
Cal Newport argues it is important not to check your phone when standing in a queue. Just be bored, do nothing, allow your mind to be unstimulated. Give up the constant getting and spending of energy. Get your heart back.
I’m interested in what people think Wordsworth’s tone, his mood is, in this poem. If we just met him walking across the park -does he seem grumpy, angry with himself/things? I wonder what kind of day he has had to arrive at this place mental place? A day I can imagine all  too well, but then I walk it off. Nature does restore.
But don’t take your phone.